Markets tanked when Wal-Mart, which represents 10 percent of non-automotive retail sales, announced it is having trouble squeezing more out of stagnant paychecks and SNAP cards, even though they are providing smaller sizes for the same price. I fully expect the govt to take credit for the coming decline in obesity, caused by the decline in purchasing power; in the same way they’re taking credit for the decline in CO2 emission due to the slower economy.

In our market-manipulated world, interest rates have been driven more by Fed policy and trust than actual economic data. Therefore, it should not be a surprise that interest rates spiked higher even on the poor retail sales data. Manipulators want you to believe the Fed will taper, which would reduce the demand for bonds and therefore drive yields up. The only problem with this story is the Fed can never stop buying bonds with printed money at this juncture without instantly detonating the economy, due to the inability of govt’s and corporations to roll their debt.

If the Fed would have cut back immediately after QE1, and Congress brought spending in line with revenues, then we might have had a chance to manage the deleveraging process. It would have been even better if we fixed the debt and leverage problem after the debt infusion in response to Y2K, the bursting tech bubble, and 9/11. Unfortunately, once we committed to the Ponzi scheme, there was no turning back.

Stocks and bonds will pull back until the Fed admits they will not taper, or Europe implodes after the German elections, sending capital fleeing into the dollar for safety, just like the 1920’s. The Fed will likely wait to see if the Euro implosion will bail them out. If Merkel wins and the Euro doesn’t crash, then the Fed will have no choice but to keep the printing presses humming.

Beware though, bonds are headed for decades of lower prices, once the great rotation from public to private picks up steam and the money fleeing Europe and Japan realizes that even the best horse in the glue factory is still in a glue factory. This is when the sovereign debt crisis hits its stride, as govt’s will no longer be able to finance their false promises.

BTW, did you notice the spike in precious metals? With nowhere else to go, and a receptive short squeeze calling, gold and silver popped in the dash for safety. The forces that be (i.e. U.S. Govt) are doing their level best to subdue the purchase of physical gold. The latest example continues to come from the largest consumer of gold, India, where they have now resorted to banning gold coins and mdeallions. This comes on the heels of multiple tax and fee hikes. 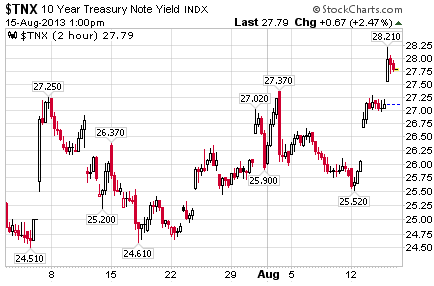 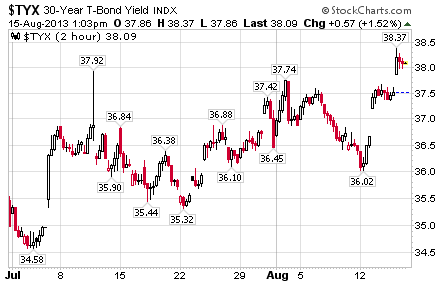 On August 8th I stated: “The stock sell off that started on Tuesday will have legs, but the blow-off top (fed by the Fed and the flight of foreign capital into dollar-based assets) is still to come. Who knows how long the pull-back will last, but it’s safe to say it will last until the invisible hand scares as many investors out or onto the short side before it starts its epic final run to the upper boundary of the Jaws of Death pattern (16,500 – 17,000 on the DOW, or higher if the run-up last until the end of 2015).”

The bag holders are in the process of being scared out of stocks and bonds and concentrated on to the wrong side of the trade (including buying the bs about the improvement in Europe). When the Fed or Europe trigger occurs, then the bag holders will be caught off sides and U.S. bonds and stocks will reverse course and start their epic march to a blow-off high (while Europe falls off the cliff). The precious metals could pull back again, possibly even making a new low (provided China plays along). However, when the gold bugs finally throw in the towel, the precious metals will start their final and strongest wave to all time highs and beyond, as the sovereign debt crisis gets into full swing.

Since Egypt is heating up again, please allow me to remind you. Our dollar printing is exporting inflation to emerging economies that spend a disproportionate amount of their income on food. Desperate people do desperate things, and the U.S. is once again on the wrong side due to our energy interest. Syria is about oil and gas, and Egypt is about the Suez delivery system. The Sunni – Shiite balance of power and their allies in the East and West are propelling the world toward another war – all because we need the world to buy their oil in dollars and we won’t solve our own energy problems.