The Choice is Simple: Defy History and Act Proactively

As Matt Taibbi accurately points out again, this time with currency manipulation, the non-prosecution of bank fraud will ultimately destroy the banks and western govt’s. The cascade of cost-of-doing-business penalties will give way to derivative defaults that ultimately blow up the banks.

Like the Jews under Nazi Germany, Main Street outnumbers the fraudsters on Wall Street and Washington by thousands to one, yet they obediently pile into rail cars that lead them to certain economic suicide. Why? I suppose fear and pain are similar to fatigue, which as Vince Lombard said, makes cowards of us all.

Karl Denninger, who have been shouting from the mountain top for over a decade, has capitulated in disgust over the complacency of the American public. Denninger is one of the most intelligent bloggers I have followed over the years, but his rant of frustration proves that even the smartest among us still has much to learn.

History has proven time and time again that the “change” desired by Conservatives and Libertarians will never occur proactively. The interest of those in govt are diametrically opposed to these changes. What politician is going voluntarily downsize their job, power, and perks? Unfortunately, the reversion back to a more constitutional govt won’t occur until we implode and force Main Street off the couch. My concern is that even after they get off the couch, their poor health will have even the most well-intentioned grabbing for the lifeboats of Socialism.

“It is difficult to get a man to understand something, when his salary depends upon his not understanding it.”   Upton Sinclair

In this day and age of the Internet it’s amazing that the debate over Socialism versus Capitalism still lingers, even though there is not one success story for Socialism. Armstrong provides the classic example  that demonstrates the absurdity of Socialism/Communism, which always flies in the face of human nature.

Socialist point to our current political economy and call it a failure, without acknowledging that what we have now is not capitalism. Under capitalism you have equal prosecution of the rule of law, and no such thing as TBTF (to big to fail). At best, we have Corporatism (on its way to Fascism).

If we don’t adopt a more proactive “V” for Vendetta attitude to force the necessary reforms, then “I” for Inevitable will be imposed by broke govt’s that results in the total collapse and a potential second Dark Ages that comes as a result of the hoarding of scarred capital across the western world. Proactive moves that actually help Main Street are required if the economy is ever to improve.

The Fed’s should start by cutting the interest rates on outstanding loans, not the interbank lending rate that only helps the banks. Halting the relentless hunt for “other people’s money”, which is driving capital underground and under mattresses, would be another proactive move that govt could implement tomorrow, but won’t, because it forces them to look at themselves as the source of the problem. Obamacare is just the latest example of govt never being able to even remotely consider itself as the problem.

History provides the answers by not only highlighting the mistakes, but identifying solutions; like Caesar’s attempt to end corruption/cronyism and apply past interest payments to principle, and Tiberious’ response to the Panic of 33 AD.

Tiberius was concerned about the economy rather than the bankers who were not primary dealers as they are today capable of blackmailing government. Tiberius ordered that NO interest was to be collected for three years. He also ordered that the bankers accept security that was to be offered at double value in real property taking into consideration how much it had fallen in price by about 50%.

Tiberius brilliantly enabled many people to avoid selling their estates at low prices, which the US Congress just bailed out banks with no strings attached. Tiberius actually stopped the fall in prices by stopping the forced sales and ensuring that the lack of liquidity would be halted. It is true that the weak banks never recovered from the panic. However, most eventually did resume business as usual.

Tiberius’s response was direct rather than indirect as the central bankers do today that help banks at the expense of the economy. Governments wrongly assume that the banks are the cornerstone of the economy rather than the participants. They routinely sacrifice the people for the banks because they are themselves the greatest debtors within society.

Tiberius did not merely increase the money supply as was Bernanke’s response of the Fed or Congress signing TARP with no strings attached. Tiberius lowered interest rates to zero for three years, but this was on outstanding loans not to create new ones with hopes of stimulating demand (Keynesian Economics). Tiberius’ response was substantially different from the quantitative easing we saw in Japan, Europe, and the USA. Lowering interest rates to zero today destroys savers, expends the revenue of banks, but does nothing to suspend the crisis in outstanding obligations. Tiberius’ approach was substantially different and above all – IT WORKED!

Both men managed a direct assault on the deflationary downward spirals by eliminating distressed sales, unlike the current Keynesian’s/Monetarist that take the indirect approach to reward the banksters at the expense of the participants. Ignoring the lesson from Japan for almost 30 years and the current tact of the Eurocrats, US central bankers are also doing the exact opposite of what is needed for economic reform.

The voices that try to highlight the intent of the fraudsters in govt and Wall Street are always painted by the captured media as traitors like Snowden, which is why you must rely on your gut and instincts and not the unending propaganda in the mainstream media.

Defenders of govt largess and corporate cronyism should know what they are doing and the price they are paying, but they’re too narcissistic to see it. As we get ready to remember those that sacrificed for our freedoms, we should also acknowledge that they did not die for mediocrity and complacency.

America is about the relentless persuit of happiness that comes from continuously fighting for improvement; not settling for being the best horse in the glue factory, as the majority around the world now view our fiat-based dollar. We either buck-up and confront our outnumbered suppressors, or you might as well start reserving your spot on the rail-car. If you don’t want fatigue to turn you into a coward, it would be wise to get yourself in shape, mentally and physically. 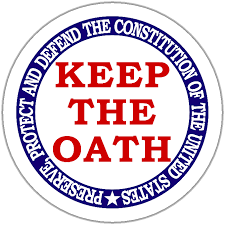 …and if you ever took the oath, please remember it was to defend the Constitution, not the President.