So Much for Campaign Finance Reform

Today, caps on total campaign giving were voided by the Supreme Court. When combined with the Citizens United case, that ruled Corporations and Unions are people, we are guaranteed to get the worst candidates money can buy. 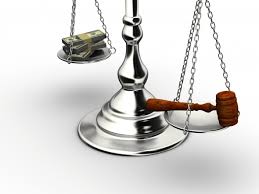 Since Independent-minded people in the middle have little to no chance of having a candidate that reflects their views, why not throw ALL the establishment out EVERY election so the lobbyist and donors will at least know that their cost of bribery will be going up?

What is done with all the donations and campaign spending? It goes to brainwashing the public through false advertising and promoting political promises that are actually lies. Campaigns spend this money because the masses buy it. In other words, they think you’re an idiot!

If you have a lick of sense you would ignore the campaign rhetoric, vote out EVERY incumbent, and tell the new candidates that term-limits better be at the top of their platform. If they favor term-limits, they should not mind being voted out next term. Tell them sorry, but you cannot trust anyone that desires to make politics a career – it’s just too easy for even the most honorable amongst us to fall victim to bribes and blackmail.

For those that think that one term is too short because too much money is spent getting elected, I suggest you turn your thinking right side up. It’s costly because the payoff for obtaining office is so high. Instead, we should have shorter terms, which would drive down the cost for running.

Limiting the time and term reduces the amount one would be willing to spend/invest to attain office. It also makes the cost of bribing and blackmailing govt officials much more expensive. Washington’s most notorious lobbyist, Jack Abramoff, feared term limits more than anything else, because it meant the cost of getting to a politician would have to be repeated every term. Term limits reduces the return on investment, and with it the number of lobbyist (http://www.cbsnews.com/news/jack-abramoff-the-lobbyists-playbook-30-05-2012/).

Our founding fathers never intended for political office to be a full-time job, and as soon as they started thinking it could be a career, it left the door open to corruption (http://armstrongeconomics.com/2014/01/22/the-collapse-of-socialism-driven-by-political-corruption/). The Texas legislature meets every other year for a max of 140 days and they function just fine.

Besides, govt is the source of the problems, not the solution. Congress is like funding a standing army – they must necessarily be employed no matter how much harm they do. Shrink the size of govt and the time politicians have to contemplate their power and intelligence, and so too will our problems shrink.