It’s quite surreal to watch events unfold in slow motion, and frustrating to know there is little you can do about it. If you’ve ever witnessed a horrific event that you could see coming before it occurred, then you know the feeling. 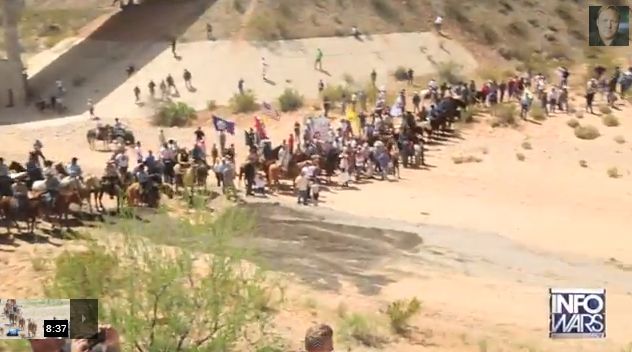 This weekend saw a peaceful, but likely, temporary end to the conflict between the Bureau of Land Management (BLM) and Nevada rancher, Cliven Bundy. In isolation, which is how the media wants you to view these events, this incident might seem like just another case of govt over-reach, with the exception that this time the govt authorities didn’t abuse a demonstrator and haul them off to jail – which might have something to do with the fact that the protestors were rugged ranchers instead of wet-behind-the-ear students. However, if you connect the dots of govt corruption, with the debt dots and civil unrest dots, then you should be able to see the train wreck that’s coming from a million miles away.

The Bundy case, and the fact that so many rallied to the defense of a generations-long rancher who was forced to reach his limit with the Feds, is just the beginning of the civil unrest that’s coming to our soil. The escalating conflicts going on around the globe are due to govt corruption, that “coincidentally” gets worse the broker govt gets, which should sound familiar and looks to be at the heart of the “cattle battle”.

Why do you think it is that the govt changed the laws so they can now go after you for your parents tax bills that are more than 10 years old, or make sure students cannot expunge their student loan debts through bankruptcy? What do you think FATCA is all about, as well as the data collection by the NSA and law changes by the British gov’t? Let’s just say it’s not about punishing the rich, social justice, or tracking down terrorists. Plain and simple – it’s called govt desperation that is leading to despotism. It’s what broke govt’s do – hunt down other people’s money instead of reforming.

If you think govt is only going to hunt down the wealthy’s money, then read the story above where the govt was worried about a few hundred dollars that a dead parent might have been overpaid.

To avoid looking like a deer in headlights, politicians then take the country to war when they can’t figure out what happened to all the capital that was needed for growth. Only in govt can a problem be called a solution.

How can government ever be the solution, when it has proven to be the problem, time and time again? The last I checked the SEC was part of the Federal Government, with the primary responsibility of enforcing the federal securities laws and regulating the securities industry, the nation’s stock and options exchanges, and other activities and organizations, including the electronic securities markets in the United States. Unfortunately, the SEC, like so many other regulators in Washington, have been MIA for over a decade and should be held to account.

James Kidney said during his resignation speech, after 28 years at the SEC, that his superiors were more focused on getting high-paying jobs after their government service than on bringing difficult cases. The agency’s penalties, Kidney said, have become “at most a tollbooth on the bankster turnpike.”

In the Bloomberg article linked above that details the negligence at the SEC, Kidney is quoted as saying, “I have had bosses, and bosses of my bosses, whose names we all know, who made little secret that they were here to punch their ticket. They mouthed serious regard for the mission of the commission, but their actions were tentative and fearful in many instances.” This is the same problem that exists in the FDA, CFTC, and every other so-called regulator, including the Justice Dept. The only solution to corporatism is to eliminate the income tax and implement term-limits of no more than a year and make the lawmakers live by the laws they pass.

Those people who always want to hold up govt as the solution for everything (maybe because they are afraid to take responsibility for themselves), seem to forget that govt is composed of the same fallible people as in the rest of society, and maybe more so. Whether they had difficulty competing in the real world, or it was the lack of competition that eroded their work ethic once in govt, many govt employees exploit their power instead of respecting it.

“Occupants of public offices love power and are prone to abuse it.” – George Washington

BTW, why do so many govt buildings require metal detectors to enter? Is govt afraid of its own employees or its customers, which they have sworn to serve? What business would survive if it was so afraid of its customers that it thought they wanted to physically harm them?

“Homeland Security did not buy tanks to protect the people from terrorists, they needed 2700 tanks for street use to protect government from the people.” – Martin Armstrong

In the real world the customer simply goes to the competitor when they are dissatisfied. Since govt knows there is no competitor, they abuse the customer until they reach their limit, which is what’s taking place all across the globe now. The hunt for capital by govt so they don’t have to reform is literally destroying the economies of the world, which is why many believe another world war is on the near horizon. Govt never reforms when it is so much easier to point the finger at some foreign boogeyman.

Relying on govt is a way of shirking our own responsibilities, which includes depending on Representatives without holding them accountable. There is no perfect system or world, but minimizing the known negative consequences associated with govt should dictate limiting it – which is exactly what our founding fathers learned and intended.

“My reading of history convinces me that most bad government results from too much government.”  “I predict future happiness for Americans if they can prevent the government from wasting the labors of the people under the pretense of taking care of them.” – Thomas Jefferson

“In my many years I have come to a conclusion that one useless man is a shame, two is a law firm, and three or more is a congress. “ – John Adams

“History repeats because the passions of man never change.” – Machiavelli

”The budget should be balanced, the Treasury should be refilled, public debt should be reduced, the arrogance of officialdom should be tempered and controlled, and the assistance to foreign lands should be curtailed lest Rome become bankrupt. People must again learn to work, instead of living on public assistance.” — Cicero–55B.C. (2066 years ago)