No Taper – What a non-Surprise

As was stated here in a August 16th post, there is no way the Fed can taper. Specifically, it was said:

Manipulators want you to believe the Fed will taper, which would reduce the demand for bonds and therefore drive yields up. The only problem with this story is the Fed can never stop buying bonds with printed money at this juncture without instantly detonating the economy, due to the inability of govt’s and corp’s to roll their debt.

It will be fun watching the talking heads backtrack from their statements about how the Fed would taper because the economy was so great, and it could withstand higher rates. How bad must things be if the Fed can’t even back off $10-15 billion from their $85 billion per month in bond purchases? This should make it abundantly clear that we are royally screwed. The Fed will print until everything collapses. The big question is why do the people who got us into this mess still have jobs, and why aren’t people in the streets?

The irony that few grasp is that while the Fed thinks it’s sticking its fingers in the deleveraging dike, its fingers are actually securely lodged in Chinese handcuffs. The more the Fed tries to fix the economy by providing more malinvestment, the worse the problem gets; and stopping what it’s doing will immediately detonate the derivative and sovereign debt bombs. The Fed could not tolerate a 2.8% 10-year. What would happen if rates returned to 2007 levels? I’ll tell you – interest expense on the debt would soar to around $1.3 TRILLION, which is greater than the national debt in 1980.

Their word is apparently not their bond if bonds don’t like their words!

While there were numerous convoluted statements made by Bernanke today, the following quote exemplifies he is truly flying by the seat of his pants: even the Fed’s projections for 2016 are “stretching the bounds of credibility”.

Now all we need is Merkel to lose her coalition grip in the upcoming German elections, which would result in the demise of the euro and subsequent flight of capital into the dollar, to see the DOW inflated to the upper boundary of the Jaws of Death pattern, which is in the 16,500 – 17,000 range for the DOW.  As investors realize the Fed actually cut its growth forecast for the current year and next, and with the debt ceiling debate right around the corner, a pullback is still likely in the short-term.

While stocks reacted positively to the gift that keeps on giving, it was gold and silver that skyrocketed more than 4 and 6 times more than stocks, respectively (the best day since Jan 09′). Gold’s rise has more to do with the lack of confidence than inflation fears. Gold will eventually catapult higher when the average man realizes that the only thing not average about the folks in charge is that they are more corrupt. When the rush to gold does occur, the disconnect between deliverable physical metal and paper obligations will finally be exposed. The bottom line is the long-term (2016-2020) cannot be manipulated, as fiat gives way to assets that can preserve value, like gold and silver.

Today’s market response to more “free” money, which resulted in selling the dollar to buy hard assets, is just a warm up of what is to come. The 95% decline in the purchasing power of the dollar since the Fed was created in 1913 will continue until the wealth transfer from the 99.9% to the 0.1% is complete. 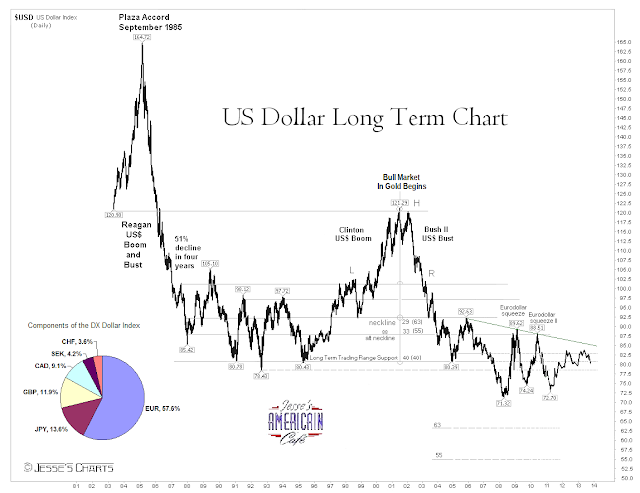 Dance while the music plays, but if you don’t realize you’re on the deck of the Titanic, it may be best to drink from the Fed’s punch bowl until you succumb to avoid the unfathomable hangover.

It’s like they’re on a train which they know to be heading for a crash, but it is accelerating so rapidly they’re scared to jump off.  Albert Edwards