JP Morgan caught in another manipulation game, this time in the energy markets – http://dealbook.nytimes.com/2013/05/02/jpmorgan-caught-in-swirl-of-regulatory-woes/.  Does anyone remember Enron?

I could literally write everyday about a big bank somewhere in the world getting caught with their pants down. It’s actually becoming boring, as it’s become so expected. What I don’t think I’ll ever get used to however, is the fact that no one EVER goes to jail. Didn’t we just learn that no one will be prosecuted for the London Whale trade, where Bruno kept doubling down with other peoples money until he couldn’t. The only difference between Bruno and Bernanke is Bruno had a constraint called shareholders. However, none of them have their fraudulent actions constrained by the law, which is the only thing that matters, because it impacts trust. In a free market economy, who’s life blood is capital formation, trust is everything.

I’m reporting on this case because JP Morgan is the most dangerous bank on the planet, and if you have money with JP Morgan/Chase you are an accomplice, maybe an innocent accomplice, but still an accomplice. Blythe Masters has grown JP Morgan’s OTC derivatives to well over $70 TRILLION, larger than world GDP. JP Morgan is the the sewer system for the house of financial fraud, and derivatives are the sh*t. Even though JP Morgan is excreting more derivatives than anyone, they think they are doing God’s work (along with Goldman Sachs), because they’re building more sewer plants.

Oops! There’s no gold or any other collateral in the Cupboard. 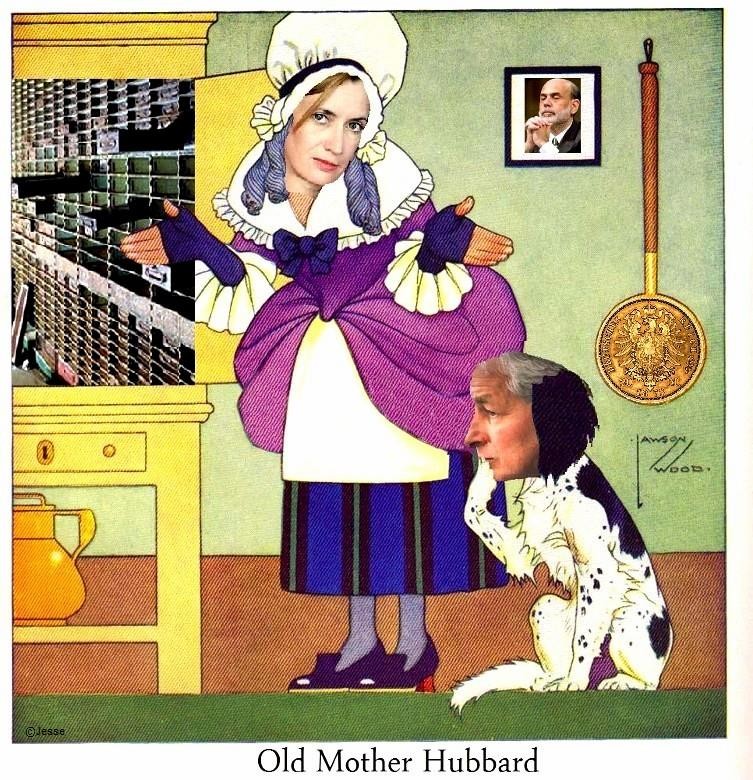 This pathological environment of in your face frauds will not end well, for anyone. We know that the current Congress will never do anything, and if voters don’t send them a loud a clear message, then the rest of the world will – https://www.youtube.com/watch?feature=player_embedded&v=hCCr-uiqtAY#!.

“But what it’s led to is this sense of impunity that is really stunning and you feel it on the individual level right now. And it’s very very unhealthy, I have waited for four years, five years now to see one figure on Wall Street speak in a moral language.

And I’ve have not seen it once. And that is shocking to me. And if they won’t, I’ve waited for a judge, for our president, for somebody, and it hasn’t happened. And by the way it’s not going to happen any time soon, it seems.”

I guess we now know why Ron Paul was belittled by the press. We couldn’t possibly allow this corrupt environment to be nipped in the bud – https://www.youtube.com/watch?feature=player_embedded&v=CmqIerOV3EM.

“They won’t take our bank accounts…they will take our retirement accounts.” – Jim Rogers

“We are going to have a calamity in economics and political crises as economies worldwide are a lot weaker than they tell us.” – Ron Paul

“I would expect that there is going to be a lot more chaos still to come.” – Ron Paul

“There are so many distortions because we disobeyed economic law – no matter what Bernanke tell’s you.” – Ron Paul

“Bernanke’s whole intellectual career has been dedicated to the study of printing money.” – Jim Rogers

“I don’t doubt [the confiscation] at all; and they will use force and they’ll use intimidation.” – Ron Paul