In Case You Forgot the Plan

The Summer recess is a very popular time to take the country to war.

Another Western war crime is in the making in Syria, which will result in an even greater destabilizing and ruthless regime filling the void (that is linked to Al-Qaida, a sworn enemy of the US, that we are consciously and purposefully aiding in a time of war – sounds like treason to me). If the House of Saud is successful at blackmailing Russia, by cutting loose Chechen rebels during the Winter Olympics, then the Western slaughter will be like cutting through butter. If Putin chooses oil and gas interest from its Iranian and Syrian partners over a trouble-free Olympics, then WWIII will get an early start.

Since energy is much more important to Russia’s future, I fully expect Putin to tell Prince Bandar bin Sultan and the U.S. to take a flying “nyet”. Afterall, the Munich massacre during the 1972 Games did little to hurt Germany. Since China’s energy interest are aligned with Russia, another Seven Years’ War could be on the horizon (and you know what followed?)

On 9/11, I hope you care enough to withdrawal your consent from the most fraudulent govt to date, and that’s saying a lot. It seems like a lifetime since the trumped-up case was made for war with Iraq. After being on the front lines during the tech bubble crash and then watching the senseless deaths in the World Trade Center on 9/11, there was a numbness that only anger could satisfy. I suppose I would like to believe that it was some uncontrolled emotion that allowed me to be so gullible. The truth was it was just plain ignorance that enabled me to buy the blatant lies, and then a patriotism that would not allow me to believe that our very leaders were complicit in sociopathic actions.

I remember debating a friend about WMD’s and parroting the justifications for war that were being made by all of our political leaders at the time. I mistook the truth for treason. In my eyes, the people who argued against the war were commie pinko’s of the same ilk as Hanoi Jane. I was the epitome of an ignorant American that was educated in public schools deprived of history and saturated with mainstream media propaganda. I don’t know if something else would have shocked my senses enough to awaken me from my normalcy slumber, but my analysis after the subprime crash served as my epiphany.

Once again I was on the front lines during the mortgage meltdown. As a portfolio manager, I was living through every air pocket the stock market hit, in real-time. Everyday I was consoling clients, many who were friends, trying to make sense of what was happening. After many months of research, I remember in early 2009 having the revelation that everything I thought I knew about how the world operated was one big fraud. I didn’t know whether to feel like a total idiot or thankful that the wool had finally been ripped from my eyes. Since that time, each subsequent layer of fraud that I’ve peeled away has exposed an even larger infamous truth that is stranger than fiction.

Don’t misunderstand me. It’s not that the world or 99.9% of its citizens are fraudsters. It’s only a very small percentage of the people who are sociopaths and fraudsters that are truly evil enough to act on their malevolent depravity. Although, “control fraud” and the “credibility trap” have caused many more to take the path more traveled.

If you don’t know what I’m talking about, or you haven’t yet discovered that everything peddled as truths about WMD’s was total fabricated BS, then you are likely also buying all of the reprehensible BS spewing out of the mouths of liars like John Kerry, regarding the case for military action in Syria. You are exactly where I was between 9/12/2001 and Jan 2009, and I hope something will shake you sufficiently to start your search for the truth.

You can start by going back and listening to what Bush, Cheney, Rumsfeld and Powell were saying in the lead up to the Iraq invasion. Review how Powell used fake chemical delivery trucks, and how they used the lie about Iraqi babies being plucked out of incubators and left on the floor to die; and compare it to the imagery being painted around the chemical attacks by our Secretary of State, John Kerry.

Below are a few paragraphs from his speech, which I’ve highlighted and provided comment to drive home the obfuscation and rhetoric that is designed to engender disgust and revenge (whether there are facts or not makes little difference to a sociopath).

Speaking about the alleged use of chemical weapons on civilians in a Damascus suburb earlier this month, Kerry said: “By any standard it is inexcusable, and despite the excuses and equivocations that some have manufactured, it is undeniable.”

[We know that people were killed by unnatural causes, but BY WHO?  It would seem that the only people manufacturing excuses and equivocations are those desperate for war and to pin the deaths on the Assad regime without presenting any facts what so ever. Isn’t it ironic that the countries pushing for war are the same ones with a debt crisis that need the distraction of war?]

“Last night after speaking with foreign ministers from around the world about the gravity of this situation, I went back and I watched the videos, the videos that anybody can watch in the social media, and I watched them one more gut-wrenching time. It is really hard to express in words the human suffering that they lay out before us. As a father, I can’t get the image out of my head of a man who held up his dead child, wailing while chaos swirled around him; the images of entire families dead in their beds without a drop of blood or even a visible wound; bodies contorting in spasms; human suffering that we can never ignore or forget. Anyone who can claim that an attack of this staggering scale could be contrived or fabricated needs to check their conscience and their own moral compass.

[Once again, who exactly is contriving or fabricating the attack? The question is not was there an attack, it’s who executed the attack, and where is the proof of who did it?]

“What is before us today is real, and it is compelling. So I also want to underscore that while investigators are gathering additional evidence on the ground, our understanding of what has already happened in Syria is grounded in facts informed by conscience and guided by common sense.”

[So, your facts are based on your conscience and common sense, which many would argue, you don’t even posses. I feel reassured now!]

[Notice how he said everything, except Syria fired the rockets that delivered the chemical weapons? Yes, we have witnessed dead people, but once again, where’s the evidence of who killed them?  There are more than enough questions about who launched the rockets, and “common sense” would indicate that Assad would have to have a death wish to use chemical weapons when and where he did, knowing the UN inspectors had just come to town and how the U.S. would respond to such an attach.] 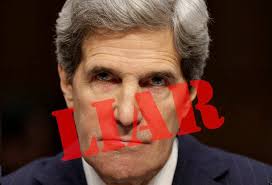