If the media conveniently allowed you to miss it, allow me to summarize: Obama finally had to repay his debt to Penny Pritzker, your average billionaire fraudster from Chicago, and tossed her the Secretary of Commerce job. Normally, I would let this slide off my back. After all, how stressed can one get over another scumbag politician? However, Obama may have just cracked his Teflon image reaching down so deep in the sewer for this fraudster (although Benghazi should have already exposed his true colors). I would love to see and hear any Obama supporter rationalize this appointment.

Greg Palast’s article reminds us all of the infectious bacteria in the Petri dish, that is Washington DC. The only reason Pritkzer didn’t ride into town with Obama, Summers, and Geithner in the first term was that she was to contagious even for these king pins of fraud. How bad do you have to be for your baggage to worry these guys?  As a reminder, it was the Rubin, Summers, Geithner triumvirate, who along with the Maestro, that lit the fuse of frauds that has imploded our economy and society.

Two of the biggest Frauds produced by Congress, that can be linked to the financial collapse are the Gramm-Leach-Seagall Act in 1999, which rescinded Glass-Seagall – the act implemented during the Great Depression that separated investment banking from normal banking; and the Commodity [Futures] Modernization Act (CFMA) of 2000, that exempted derivatives from any regulation or any margins. Both, incidently were signed by the original Teflon Don, Bill Clinton. CONgress is still at it, but these two intentional Acts of corruption started the bubble of fraud that continues to rise to this day.

By the way, notice the two bookends at Clinton’s signing in 1999. Larry Summers, Treasury Secretary under Clinton and Obama’s National Economic Council Director, and current Speaker Boehner. You will also notice many other familiar faces in the clown brigade, that through a just act of karma, will now have their reputations indelibly linked to this sad stage of history.

A year after giving the banks the right to commingle their speculative investments with depositors money, Slick Willie drove the final nail in the coffin that would seal the fate of the predictable collapse by signing legislation that would allow for the unregulated, and untethered expansion of derivatives, that now exceeds a notional value of well over $1 QUADRILLION.

In 2000, Clinton signs the CFMA during Congresses last day in session, in front of the kids whose futures he helped destroy.

Since Clinton chose to exploit the kids in this photo, permit me a brief aside to highlight how he helped screw the kids. There is absolutely no question that derivatives (i.e. CDO’s) were at the heart of the financial collapse, a collapse that is already the worst since the Great Depression, and it’s far from over. Government has promoted subprime student loans as the path to employment. With Home Equity Loans and credit card debt not growing, how else was the govt going to keep the credit Ponzi funded? The obvious answer is on the backs of unsuspecting students.

Since they were the recipients of all the free money, Universities were more than happy to play along, just like all the beneficiaries during the housing bubble. Students where just The Mark in the next con, turning students into debt slaves (student loans cannot be expunged through bankruptcy). Are students getting a better education with all this extra money flowing into schools, or has the excessive salaries and benefits made teachers and Administrators more like their govt counterparts – lazy and inept from the void of competition? If K-12 education is producing noncompetitive cyborgs, why should we expect our Colleges to be any different?

We found out in 2008 that nothing could possibly collateralize $1 Quadrillion, and the problem has only gotten worse, just as was predicted over 15 years ago. Prior to Clinton signing the CFMA, many serious individuals warned about the implications of deregulating derivatives. However, the most famous documented case came from the Brooksley Born’s testimony in front of Congress, with Greenspan, Ruben, and Summers ridiculing and belittling Born, something that would later influence her decision to resign her post as head of the CFTC. 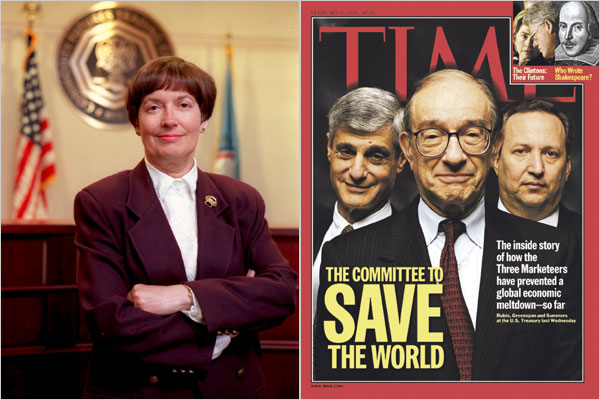 The Hubris in Chief’s obligation to tap Subprime Pritzker for Commerce Secretary is worse than putting the fox in charge of the hen house. It demonstrates the contempt for the American people by elevating past frauds and fraudsters. Predictably, it also proves that Obama has never had any intention of ever changing anything.