The lies and deceit coming from this President of the United States (POTUS) are beyond disgraceful, and certainly raises the bar for future Presidents. Whether you measure declined Freedom of Information request, redacted text, or the war against whistle-blowers and leaks, this self-professed transparent President is the most secretive in history. By the way, what’s the difference between a leak and a whistle-blower? Both reveal incidents of government lying that someone with a conscience would like to report. If government was truthful, then what would there be to leak? Are the leaks about national security or national embarrassment and cover-ups, and why is government attacking the reporter who is the recipient of the information? Why is the media having a tizzy about the government invading the privacy of reporters, when ALL digital information is captured and stored by the government for ALL citizens? The only thing that’s transparent in this Administration is the Presidents character.

I have no sympathy for the media, even though I know one of the reporters being unjustly targeted for reporting the truth. Why is the media suddenly hemorrhaging indignation over government targeting of AP, Fox, and CBS news reporters? It’s hard to empathize with a media that selectively shows outrage over a reporter doing their job, when the same press was calling for the lynching of Julian Assange for spilling the beans over similar government cover-ups.

Even though it would be impossible for the President to carry out such wholesale frauds without a complicit media, the focus today should be on the award winner and not the runner-up. It doesn’t matter if President Obama is preaching about the need for transparency, or cracking down on financial fraud, or his no-nonsense policy against IRS abuses, this President is the epitome of hypocricy. Because of his historic lack of transparency, and the crackdown on whistle-blowers and leaks, President Obama unanimously wins this years “POTus Calling the Kettle Black” Award.

President Nixon’s bar of deceit was obviously pre-Fosbury flop era, and certainly no match for the professional liars of recent times. The bamboo and tubular aluminum poles of the Bush and Clinton era are no match for the carbon fiber forked tongue of Obama. Like loyal sports fans that are more interested in seeing their favorite player in action, Obama fans are more enthralled by his performance than the means of achievement. It doesn’t matter how much he lies, as long as he can keep his approval rating over 50%, then he deserves to stay in the lineup. Based on the low bar set by the left, I would not be surprised to see Hillary waddle into the on-deck circle so she can be rolled over the bar in 2016. No doubt the Right will find someone to tunnel under the bar.

If fans would have realized the frauds at the beginning, before the celebrity image was painted by the media, would they have allowed the charade to continue? I would like to believe that if Lance Armstrong was caught cheating after the first yellow jacket, that he would not have been permitted to compete in six more Tour de France’s. If people would have known the audacity of Obama’s deceit, would people still have voted for him, twice? Unfortunately, an ignorant and complicit media make it more and more difficult to separate fact from fiction, especially after the Teflon armor of celebrity had been established. Clinton, Bush, Tiger, Coby, and the other sports heroes that have been paraded before Congress prove that our society revere’s celebrity more than character. Once people have so much emotional investment in their idol, you might as well be attacking them personally.The only thing people hate more than being duped, is having to admit they were duped. At this point, I’m afraid the only hope is that Obama either falls on his tenuous pole or he spontaneously starts chanting from Psalm 119:29.

I thought we had reached the bottom of the barrel when our President looked the American people in the eye and said “I did not have sex with that woman”, or when he started telling us what the meaning of is, is. I remember living through that experience and thinking that the rapid moral decline of the country cannot be far off. While immoral behavior may have existed in other White Houses, it was not played out in our living rooms as an example for impressionable minds. At least in the case of Nixon, there was a consequence. From Clinton forward, control fraud has been the modus operandi; and advancement, in both the private and public sector, is increasingly achieved through unethical behavior, while consequences have disappeared. If there are no restraints on immoral behavior either though the rule of law, ethics, or God, then a society will eventually crumble.

I believe that most people are inherently good, which also makes them gullible and susceptible to the smiling face of a killer or the silver tongue of a snake oil salesman. How often do we hear the story of a little old lady getting conned out of her last penny, simply because she possessed old fashioned values, like trust. A sociopath does not care what you feel, and they are masters at using your trusting ways against you. Even the most amiable of people can hide their true character.

The recent IRS, AP, FOX, and Benghazi scandals are further evidence that absolute power corrupts absolutely. Our Founding Fathers understood that human beings are flawed, susceptible to human emotions, and thus devised a system of checks and balances that limit the size of the beast. Unfortunately, they failed to comprehend the boundless creativity of human ingenuity. Once digital money (debt) could be created out of thin air, securitized and rated as AAA by captured insures like AIG, and sold by banksters that used to do business based on holding and servicing loans; all limits were removed on the profits that could be made from transactional banking (enabled by the Clinton-Rubin crime family when Glass-Steagall was demolished). Everyone has a price, and with unlimited money printing the price of all politicians has been determined.

Can a trustworthy person ever win the Presidency anymore? I don’t know, but if it is possible, it has to be someone who understands what the Founding Fathers understood, that all people are flawed, especially when given power, and as a result the scope of that power must be constrained. Therefore, the next honest leader must necessarily believe in smaller government. Since Democrats and Republicans have proven they are incapable of following the guidance provided by the Founding Fathers, the next leader must come from a third Party. The next logical question is, where is the Independent voice in the USA going to come from? I do believe an Independent message will arise in 2016, and they will be inspired by people like Nigel Farage, the leader of the UK Independence Party (UKIP). 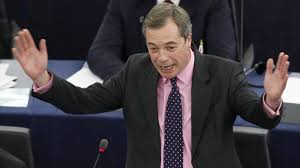 In his recent address to the EU Commission, Mr. Farage highlights the exact same hypocritical issues that we face in this country – politicians living by different rules and with different benefits than the rest of the population. As the questioner at the end of the video highlights, when you have an ever growing government that must fund itself with ever increasing tax dollars, then the resources of government are focused on confiscating the earnings of citizens. Government is the problem because they can never consider themselves the cause, and because they think the problems can always be solved if everyone would just pay their taxes.

How in God’s name can anyone argue that government can grow the economy when the funds needed to run the government only come from two sources: either confiscating the discretionary funds of consumers through taxation or by issuing more debt that depreciates peoples income and purchasing power. Simply put, government is a very inefficient expense on the nations income statement. All they do is steal from the productive class and fence the goods. They are essentially a giant money laundering operation that siphons off a large share of the take.

When government confiscates or debases the money in people’s pockets they force more people into government dependency to feed their families. This dependency took time in the US because they first had to drive mothers into the workforce, whether they wanted to or not. Once two incomes were not enough, the expansion of credit was permitted to explode to keep the charade alive.

Not only does government dependency suck the life blood of innovation out of the population, which is the true source of economic expansion, but it reduces the life blood of capital formation – savings. Without savings as a source for loans, our economy and banks are dependent on debt, leverage, and faux-collateral like derivatives. Like a consumer that utilizes additional credit cards to maintain their lifestyle, the Federal Government can kick the can longer than they should, but eventually the laws of mathematics prevail. When additional debt is the source of payments and suppressed interest rates are required to prevent the debt from blowing up balance sheets, which punishes savers, pension and insurance funds; then civil unrest will eventually erupt due to the loss of purchasing power and the increasingly harsh tactics to suck the life from citizens and small businesses. Eventually, markets will force rates higher and the lack of liquidity, caused by a lack of trust, will expose air pockets under sell orders that will make the term “flash crash” known by even Obama voters. Either way, debt creation that crowds out good money with printed money, is not only a job killer and unsustainable economic solution, but it is a creator of civil unrest and wars.

When politicians can’t sell tax-funded bailouts of the banks to its citizens anymore, where will the money come from? Do you seriously think they will jeopardize their campaigns by telling the banks to get a trim? Unless the people force de facto term limits by voting every incumbent politician out of office, every election, politicians will always listen to those with the deepest pockets that fund their campaigns, and those companies reside in the financial sector, and healthcare and food processing industries. Follow this and the other four steps, along with eliminating deficit spending and the debt, and positive change is possible. Otherwise, the POTus Award will be the status symbol of elites, and ignorant citizens will continue to gawk and applaud their (mis)leaders.